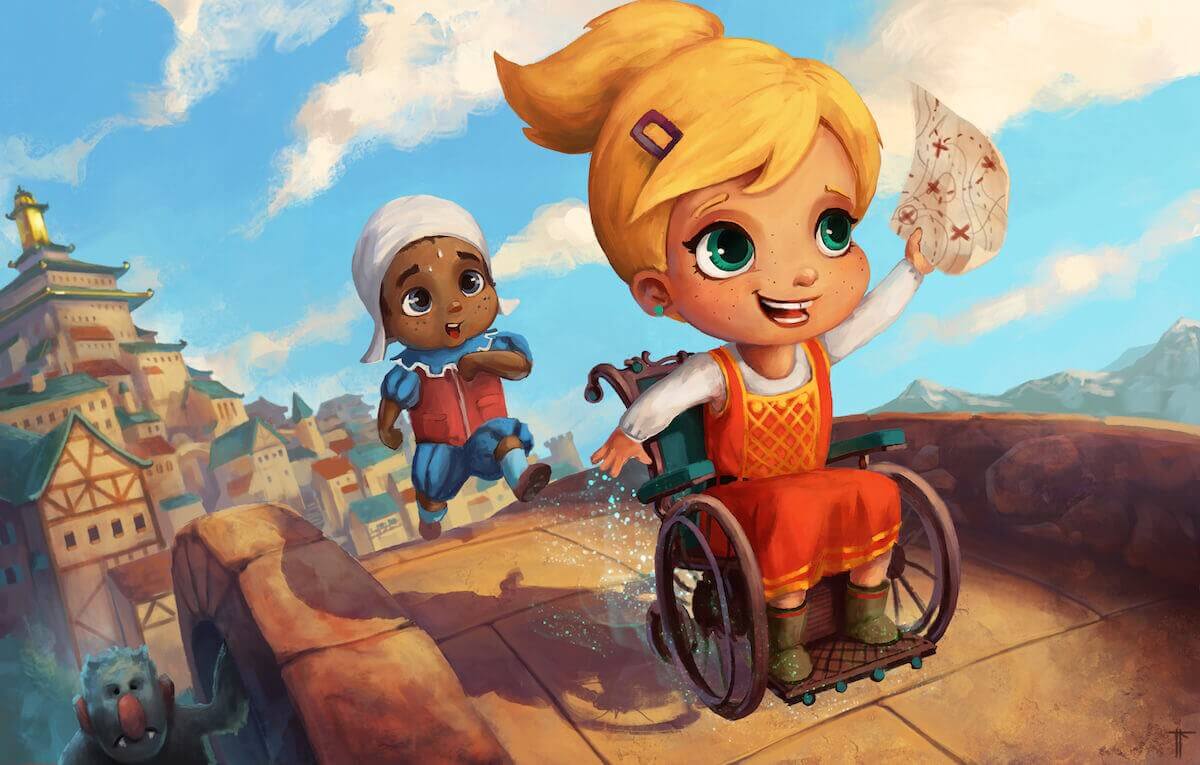 The Storyworld is available for download for the iPhone on the App Store here: Bedtime Stories — read & tell App.

Thank you for joining us and welcome to my blog. Please introduce yourself and tell us a little about you. 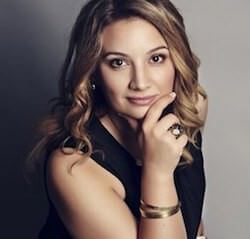 Thank you for having me!

I’m Sofia Jarlo from Stockholm, Sweden and I’m a teacher turned Children’s Book Author. In my work as an author, I got the opportunity to work with two things I’m really passionate about: children and stories.

Through my authorship, I will create unity between people, but also give kids emotional and engaging stories with a lot of action and excitement.

What’s the name of your Storyworld and what is it about?

Nikki and The Long Lost Treasure is about Nikki who’s in a wheelchair but doesn’t let that bother her from being adventurous. In the village Gochester, where she lives, the people have to fear the beasts even though they lived side-by-side once. When Nikki finds a treasure map to save Gochester and make the beasts friendly again, she takes on the challenge and together with her friend Boltran she goes after the long lost treasures to bring them back.

How did you come up with the stories and characters?

I was in the writing process of my second book and I felt a lot of pressure from my readers and from my own expectations to create a second book as good as the first one. The first one took me four years to write while working part-time, but now I just had a few months and I was a bit stuck. I realized I needed to create a very different character from my existing one and I remembered that when I worked as a preschool teacher some years ago I looked for a book with a child in a wheelchair and couldn’t find one in the library.

So I went back to the library. They still didn’t have one! I began to think about it and my fantasy genre. Maybe I should do something about it now and create that missing story. I wanted to test my idea and remembered my college friend, Linda Hammarqvist, from 2014, who I’ve seen on Facebook had a daughter in a wheelchair. I phoned her and presented my idea. The line was quiet for a few seconds and then I heard a loud cry. I had to pull my phone away from my ear. But it was a good cry. She was happy and she told me that she had really missed a story like that. Linda said she couldn’t find any story with a character or role model in a book for her daughter, Elin Hammarqvist. The only one Elin could identify with was “The Little Mermaid”. Maybe that is partly why she is now competing in swimming and aiming at the Paralympics and her mother is the chairman for the association Nacka HI, one of Stockholm’s largest para sport clubs. So I get much inspiration from Para sport and the real heroes there to get the right energy in my story.

Click here to listen to the music, which I probably have heard thousands of times to keep my motivation at a high level

Tell us about the themes in your Storyworld. Why are they important?

I like to create role models — a hero for those anyone to identify with, no matter your physical capacity. And to show the world that heroes can come in many shapes. When I went to Stockholm’s biggest library for children literature, I’ve got some help from the librarians to find books with people in wheelchairs as the main character. I looked at the covers. The characters were depicted as a portrait (cropped) and most of them were boys. I decided to make my character stand out — and the creative team of Bedtime Stories agreed.

Are there educational aspects to your work? If so, what are they?

The story highlights the fact that action and thrills are something for anyone — it’s about effort and mindset. In Nikki’s case, the wheelchair doesn’t own her. She rides it and it’s just like a bike. Life offers more to those who are courageous and dare to see opportunities instead of obstacles.

There is also an underlying theme that harmony in life cannot be taken for granted. In the village of Gochester the balance has been disturbed and needs to be found again. Balance is the key. Love, compassion, hope, wisdom and courage make up the treasure and harmony is the result. In the midst of all this, friendship occurs in different shapes throughout the story. Together, Nikki and Boltran help each other while embarking on amazing adventures — each of them with different abilities — but both with the same goal.

When and why did you begin writing?

I love stories, to read and to tell. When I was a teacher one of my favourite moments was when I invented stories while telling them to a group of kids. After some years I was ready to write the most popular of them and that is the work I’ve been doing the last five years. But when it comes to Nikki and the Long Lost Treasure it was created after I got asked to write for Bedtime Stories. I was so curious if the story would work — so I went to a school and had it tested on a class of children and they gave the storyline two thumbs up.

How many books have you written to date? What inspired you to write your first book?

I have written two (in Swedish). It’s a fantasy series “The world below” in the genre magical realism for 6–9 years olds. The environment is inspired of a silver mine in Sweden called Sala Silver Mine. And I was so inspired of see the groundwater the first time I was in a guided tour there. It was lighted by lamps and the colour was almost green and to walk in the cave-environment was awesome. So I created an exciting story from it and with a lot of inspiration from the 6-years olds pupils that I had in my class at that time.

Do you have a specific writing style? Is there anything about your genre that you find particularly challenging?

Yes, I believe I have. I focus on taking a child’s perspective when I write. I like to use a lot of dialogue and not write so much as descriptive text. My stories have a high paced language and excited feel.

One challenge (of many) is that children and adults often have different ideas of what is fun — different senses of humour. Sometimes when I’ve written a joke they don’t laugh. But instead they laugh at another section of the story that I didn’t even think was funny.

The language is also challenging for me since english is not my native language.

When did you first consider yourself a writer?

When my first book was published. But I have had some smaller work published before that, but it was after my first book I truly felt like an Author!

Where do you turn for inspiration?

Sometimes it can be a picture, other times it can be music or watching TV or from real life, people, children, friends and travel. Inspiration is everywhere around us! I’m playing a lot with cultural places and create my own storyworlds. Like in Nikki and the Long Lost Treasure. The village, Gochester is inspired by the city Mostar in Bosnia (Yes, I’ve watched great documentary with Khazar Fatemi about unity despite religions) and there is also a bit of inspiration from Japan, their rooftops and the Golden Palace.

All stories also evolve during the writing process, and in my case with Nikki, my translator Carolina Hawranek, has been such a pearl. At one point she asked “why don’t you let the people in the village feel scared about change, like they probably would in real life?” I had not thought about that, but it was an excellent idea and I mixed it with my idea about the destruction of the bridge in Gochester. So the bridge ended up beeing sabotaged by the villagers afraid of change — not by the giant as I had originally imagined.

What were your favourite books as a child and why?

When I was a smaller kid I liked the book “Historien om någon” (The history about somebody) by Åke Löfgren, because it was exciting.

When I grew older I liked “Mio, My Son” by Astrid Lindgren, cause it had an emotional depth, fantasy and action.

And when I became a teenager I liked the Nancy Drew serial a lot, written by Carolyn Keene. Exiting mysteries and riddles which were challenging for my mind.

Later in my teenage hood I came in contact with Greek mythology. It inspired me a lot with fantasy, action, emotional depth and symbolic telling.

What book are you currently reading?

I’m currently reading a manuscript written by another Author. It’s supposed to be a fantasy book for adults and I’m helping out as a proof-reader.

What advice do you give to writers starting out on their career?

Surround yourself with other writers. You will learn a lot and you will grow. Read Supplementals about authorship and you can avoid doing a lot of mistakes. And of course: be brave, you can do it — and put your heart into it!

What are you currently working on and what is your next project?

To translate my book series “The World Below” (fantasy for children) in to English.

Do you have a blog or website readers can visit for updates, events and special offers?

Thank you for telling us about your Bedtime Stories Storyworld and your books! We can’t wait to read them!